More on Hypertext, and the IoT

Ted Nelson is generally credited with inventing the term "hypertext" in a 1965 paper for the Association for Computing Machinery.

I once heard Nelson make a presentation to a conference in California. I remember his lecture as... rambling. Ironically, his talk was bedeviled by digressions and tangents.

It was only much later that I found a passage where Nelson succinctly described hypertext as "non-sequential writing - text that branches and allows choices to the reader... a series of text chunks connected by links which offer the reader different pathways."

George P. Landow, a professor at Brown University, traces the idea of hypertext further back, to Vannevar Bush, who in the 1940s asserted that the human mind does not work by classification and categorization, but by association.

The value of mapping connections, and writing hypertext, was overlooked at that time, Landow admits, but only because it was hard to implement.

The World Wide Web, of course, blew that barrier away in the early 1990s.

Tim Berners-Lee, who invented the Web, was influenced by early hypertext theory. After all HTML, the language of the Web that he invented, stands for "Hypertext Mark Up Language." 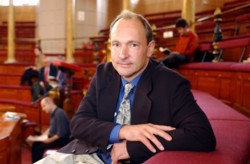 In his book "Weaving the Web," Berners-Lee summed up how hypertext matched his model of how the world is held together.

In an extreme view, the world can be seen as only connections, nothing else. We think of a dictionary as the repository of meaning, but it defines words only in terms of other words. I liked the idea that a piece of information is really defined only by what it's related to, and how it's related. There really is little else to meaning. The structure is everything. There are billions of neurons in our brains, but what are neurons? Just cells. The brain has no knowledge until connections are made between neurons. All that we know, all that we are, comes from the way our neurons are connected.

The challenge, as Landow points out, is that implementing connectivity has never been easy. That's the genius of Berners-Lee's World Wide Web: it makes global hypertext relatively easy.

You have to be willing to learn HTML, but that's a low barrier.

Connecting devices, as in the nascent Internet of Things, is more difficult. There are more electronics, more circuitry, more hardware.

Traditionally, if you didn't have training in electrical engineering you would not be able to find a way into this arena.

But then the "Maker Movement" came along, riding on a wave of entry-level hardware hacking ecosystems, built around circuit boards like Arduinos, Raspberry Pi's, Particle Photons, and Electric Imps.

Hackerspaces, where you can experiment with these devices, have also sprouted up. Four or five are now percolating within a few miles of my house in Cambridge, Mass., USA. The implied promise of these places: the technologies that are driving the Internet of Things are learnable.

I bought into that idea. Maybe you're in too. Maybe that's why you are reading this.

Yet even as my Tuesday nights pile up, I have to be honest: despite the energy and enthusiasm of the Maker Movement, the Internet of Things might still be a technological bridge too far.

And maybe not worth the trouble, if the strolling public doesn't share my near theological interest in connectedness.