After remaking the District Hall gumball machine, with a stepper motor and a newly engineered case, we turned our attention to making one for Fab@CIC - with a twist.

Fab@CIC's Mixed Reality Challenge, located at the entrance, has two goals: to get you to play the game, yes, but also to lure you to the rear of the coffeeshop, where things start to get makery.

So in the new version at Fab@CIC:

The sensor driving this last interaction -- with the metal oak leaf -- is a capacitive sensor.

Why? Because I was getting tired of having to explain the augmented reality interface.

Primarily because... it's invisible! That puts an extra burden on you, the programmer. First you have to tell the visitor that there is something on the wall, and then get them to a) download an app; and b) look for it.

So instead: a simple capacitive touch sensor. You just have to touch it, and a nearby LED display tells you the Secret Word that gets you a free cup of coffee.

I bought a bunch of capacitive sensors from China. They were a dollar and change each. 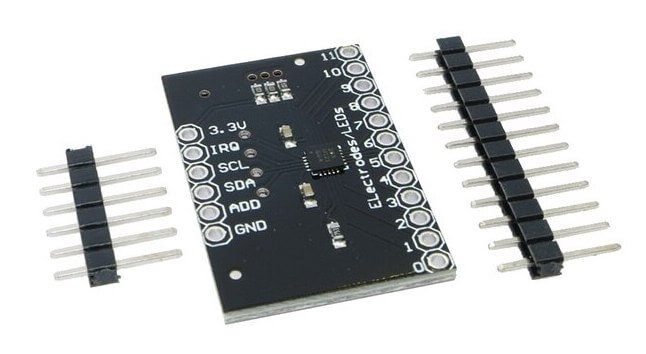 I love the endless webpages at AliExpress. Like this one. They go on forever, as if they have just one more thing they want to tell you.

The capacitive sensor senses the electrical charge from your finger on something conductive, like metal. Very simple.

Copper has high electrical conductivity, so I went with a copper oak leaf that I bought for a few dollars at a Boston craft store.

Online the best source of capacitive touch info is Bare Conductive. They've built an entire company around it. If I didn't already own all of the components, I would have definitely sprung for one of their Touch Boards.

They are good at explaining how the Touch Board, and capacitive resistance, works:

Each Touch Board electrode generates a sensitive electric field.

Your finger couples with the electrode’s field and connects it to earth, which the Touch Board can detect. Each Touch Board electrode generates a sensitive electric field. Touch screens on your smart phone or tablet, or the trackpad on your laptop also work with capacitive sensing.

Capacitive sensing is a proximity sensing technology. It detects nearby objects by sensing that the electric field generated by a sensor (in this case one of the 12 electrodes), has been disrupted. It can detect anything that is conductive or that has a significantly different permittivity* than that of air, like a human body or hand. Capacitive sensing is the technology used in smart-phone screens to detect touch. It’s also used in other situations where there’s a need to detect human touch or proximity. It’s also used when trying to detect something without touching it. The Touch Board has 12 capacitive sensing electrodes, each of which can individually detect touch and proximity.

After waving my hands to explain AR, a simple touch interface was refreshingly primal.

Unfortunately, I didn't get to use it that much, because not long after I got it all set up (and this is moving ahead a little bit) the Coronavirus pandemic arrived, and no one wanted to touch anything.

That's when I moved on to gesture sensors, but that's getting ahead of the story.

A night out for the toy capsule machine