It's the "hello world" of physical computing: blinking an LED.

It's making the connection, seeing if it works.

My first experience blinking an LED was Getting Started with the Arduino: the book and the kit. 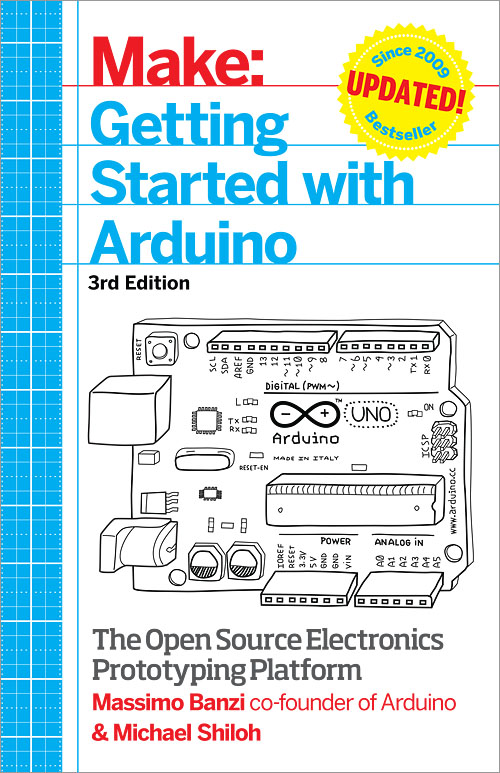 I began with the book, reading the basic theory behind physical computing. Then I switched over to an actual, real life Arduino board, which I had ordered.

I followed the instructions, plugged in a few things, copied some code, and -- yes -- made the LED on the Arduino board blink according to a pattern I chose.

It was rudimentary, but it brought together physical and digital computing in a vivid way.

Directing electrons around a small plate of fiberglass and epoxy, making them do what you want them to do -- that's exciting and illuminating in a quiet way: an epiphany that requires only a laptop computer, a few electronic parts, and a book held open with a jar of honey (this was all taking place on my kitchen table).

That's one reason why Arduinos are so popular. They unpack what has traditionally been tightly jammed together into circuit boards, unlabelled and unexplained.

Take the cover off a cheap electronic gadget, and there's a circuit board in there, alright, but what the hell's going on with it? How does it work?

The creator has no interest in telling you. In fact, there are plenty of reasons not to explain it. Starting with: Why help competitors copy it?

The non-profit, open source Arduino is different: everything is explained, to just about whatever level you want to drill down to.

That's why it's so rewarding, intellectually, to monkey with an open source electronic circuit board: to take it apart, physically and mentally -- even if you only do it a few times before you stash the whole project away in a drawer forever.

I enthusiastically recommend this combo -- Arduino book and kit -- to introduce yourself to what can happen when you combine computing power and physical objects.

Here's the book on Amazon.

Full disclosure: Placemaking Report is reader supported. When you buy through links on this site, we may earn an affiliate commission, with no change to the purchase price. Learn more.

A similar payoff is available via the Particle Photon: when you buy a basic kit, and work through Particle's simple Blink an LED instructions.

Except that it launches the experience into a global, internet-connected grid.

Blink an LED... ON THE OTHER SIDE OF THE WORLD!