The importance of the cloud to the Particle became evident soon after I purchased my first Photon. That very week, a couple of young Particle engineers happened to be in Boston, to make a presentation at the hardware incubator Bolt.

When I arrived, a dozen or so hardware hackers were gathered around a large conference table. A few Particle Photon boards were getting passed around: they were small, elegant, bristling with promise. Each one was seated in a square, thick chunk of foam, like a high tech jewel, encased in a rough-textured cardboard box.

Hardware hackers and professional electrical engineers were peppering the Particle team with questions.

About twenty minutes into the discussion, one participant posed a surprising query.

"What's the dog and what's the tail?" he asked as he held up one of the boards.

"Is this board the dog, or is it the tail?," he elaborated. "I'm thinking the dog - the most important part of this product -- is the cloud."

"The cloud is the dog," one of the Particle engineers responded flatly, without hesitation. "What you're holding is the tail."

I flipped through one of the spec sheets that were circulating. This illustration caught my eye: the little devices out there in the world (far left), all connected to the cloud (middle), and via the cloud to the application running on your desktop computer or phone (far right).

Notice that the arrows go both ways.

And then there's this illo, below: "devices" (in this case coffeemakers), each with an embedded Particle Photon, controlled by applications on computers, phones, and tablets via the cloud. 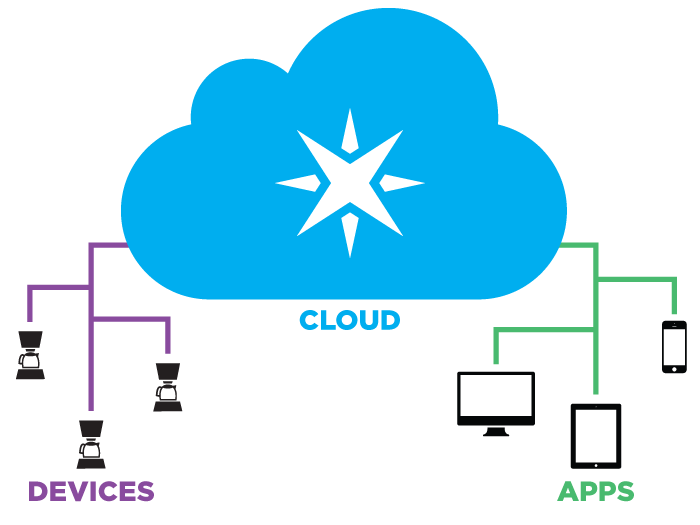 When you connect your Particle to Wifi, it sets up an "agent" on its cloud server. Then you just have to control that, and it will communicate to your device.

This was good news to me: the cloud connection made the Particle a much more interesting device.

Next - Blink an LED