Using Augmented Reality to Hide Messages in the Real World

Augmented Reality (AR) is the subset of Mixed Reality that powers the Mixed Reality Challenges that launched at District Hall (and later at Fab@CIC).

Augmented Reality is the technology that "superimposes a computer-generated image on a user's view of the real world, thus providing a composite view," according to the Oxford Pocket English Dictionary definition served up by Google as the top search result for the term.

The most accessible AR experience: the information that's overlaid on a typical television broadcast of an American football game: the first down line, the clock, and so on. That's AR.

The Mixed Reality Challenge chose to tap AR because it's future interesting, of course, but also because there are now many free augmented reality apps to choose from.

Why so many? Because all the major platforms, Apple in particular, are hoping it catches on.

So all the platforms are trying to make it a downhill ride for developers. Apple, for example, is promoting ARKit, which makes it easy for coders to build AR apps.

To find just the right AR app, I tried out about a dozen free AR apps on my iPhone 8.

My test location: Kendall Square, Cambridge. It's a big, open space that was on my way to work.

That's the Cambridge Innovation Center building behind an early AR "TEST," in the image that accompanies this post.

I was looking for the simplest AR app - the easiest to use, and the most reliable.

I think I found it: WallaMe.

WallaMe has a simple motto: "Hide Messages in the Real World."

You also have to like their advice on how to start: "Find a wall."

Once you've got a wall, WallaMe lets players draw or drop hidden augmented reality messages on it. You can also view other user's messages in the "Public Walls" tab.

If you point your camera at the same location a public picture was taken — at the same angle — the secret message will glitch around until you get into just the right viewing spot.

Apple iPhone users can download the free app here. (Update: in mid-2020, the app disappeared from the Apple app site in the U.S.)

These WallaMe videos don't lie: it really is this simple.

And an official WallaMe video:

WallaMe is based in London. Co-founder and CEO Stefano Iotti was raised in Italy, which may be why the app's early users tend to be European.

Weathered gray landscapes from Prague, Budapest, and Lisbon loom behind many of the AR images that show up on the app's homescreen, and on the website. The dark palettes are a refreshing change from the bright sunny backgrounds of California-created apps.

Alyss, for example, used WallaMe to place a unicorn in the middle of a street in Riga, Latvia. You know it's Riga, because WallaMe shows the location on a Google map. 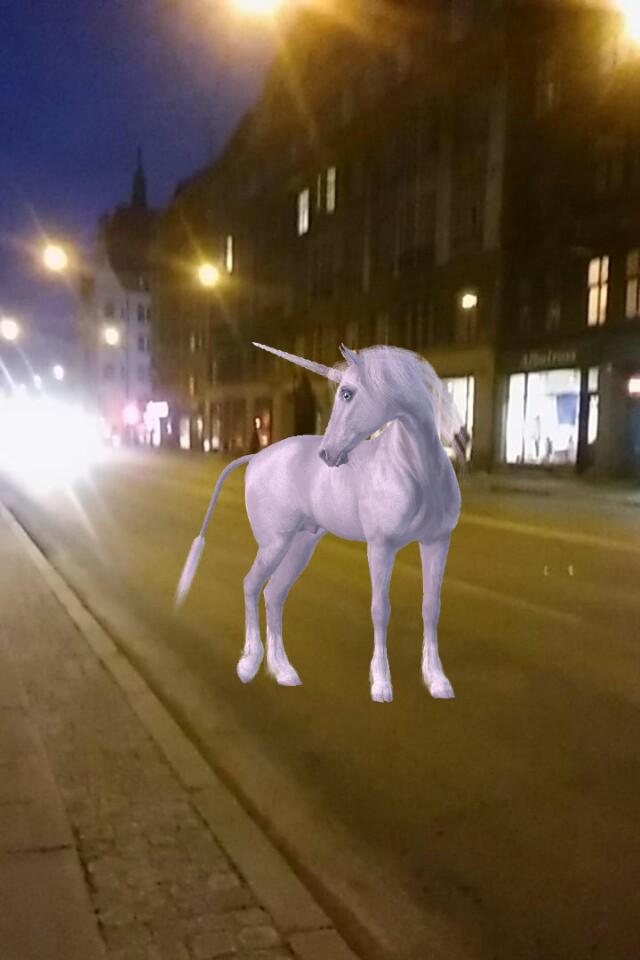 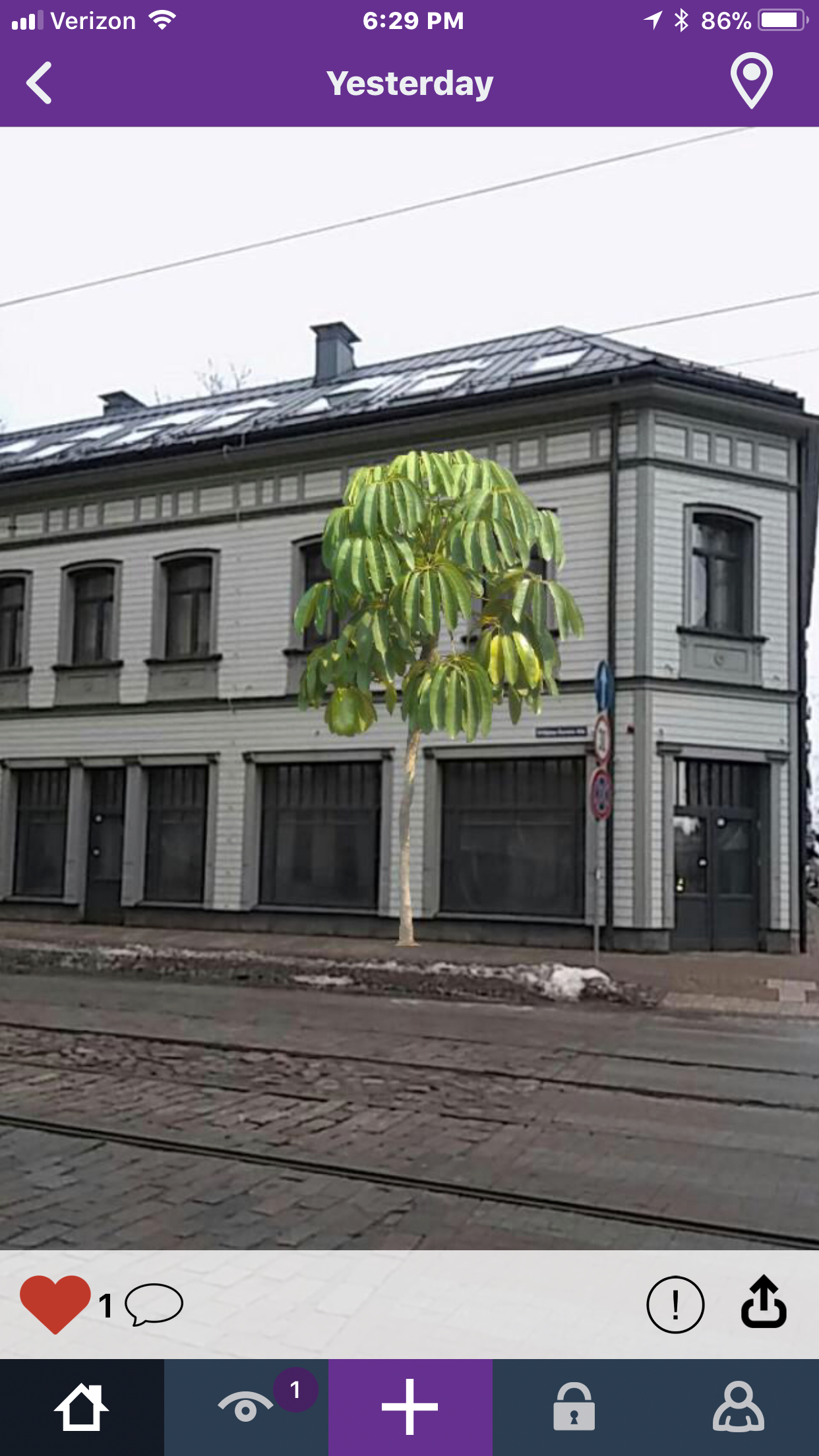 A banana tree in Riga 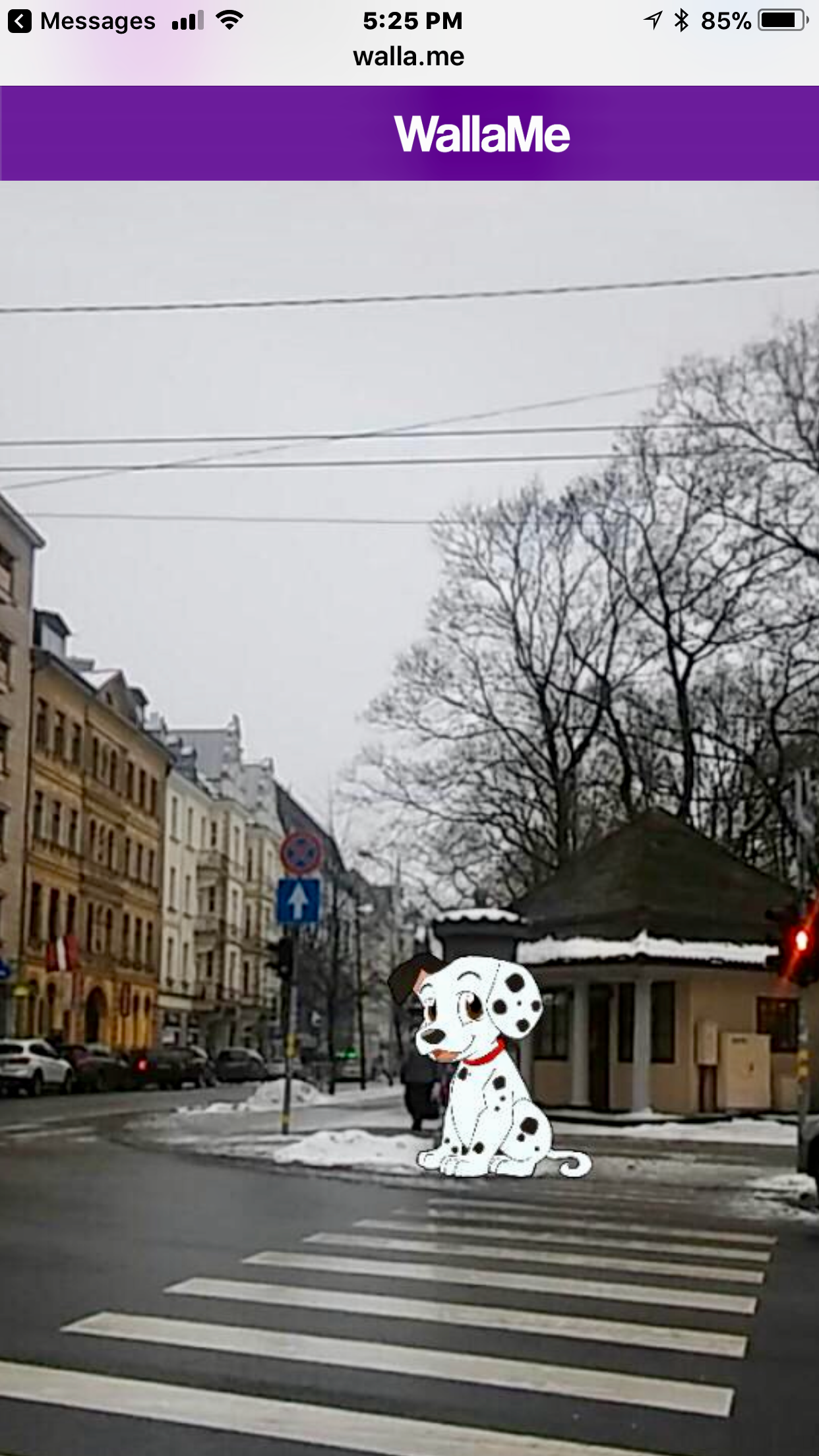 A dalmation waiting in a Riga crosswalk

Scrolling through the latest public AR images on WallaMe, one is struck by the realization that most people don't really know what to say on the walls around them.

The dominant motivation appears to be: "just checking out this free app I downloaded."

Backgrounds include many bureaus, kitchen tables, and public parks.

Fireboom, for example, probably created this image, below, while sitting on his bed. The image was made in Albuquerque, New Mexico. WallaMe will tell you what neighborhood, if you're interested. Fireboom probably drives a muscle car, judging by his or her icon image.

Of course, WallaMe has ambitions.

It has a full service platform for advertisers, and a private API that enables advertisers and third parties to integrate the Augmented Reality capabilities inside their apps, with the same functions of WallaMe.

WallaMe also has a SaaS application, a premium service that allows advertisers to manage and configure their own Augmented Reality digital campaigns.

But, WallaMe is also simple enough to scratch a very simple AR itch.

So that's the AR app we're working with.

And speaking of simplicity, one upside to the current crop of AR apps: the companies are so small, an inquiry is likely to get a response from the founder and/or CEO.

That was the case with WallaMe. When we had some trouble handling images, we got a response from CEO Stefano Iotti.

When we told him we were thinking of using WallaMe in a game, he was encouraging, offering this sentence to be added to this site: "WallaMe allows you to hide and share messages in the real world, that can be seen only by those you want."

"Furthermore," he added, "you could find helpful to share this hint: In the creation phase, if you want to get a good result you have to choose a target that does not change over time: trees, sky, people and animals are not good targets as they move and change. Good targets are paintings, signs, sharp images."

And walls. Why not try one in District Hall or Fab@CIC?

But first (this is a reminder) you have to download the free WallaMe app. (Update: Android only, as of mid-2020.) 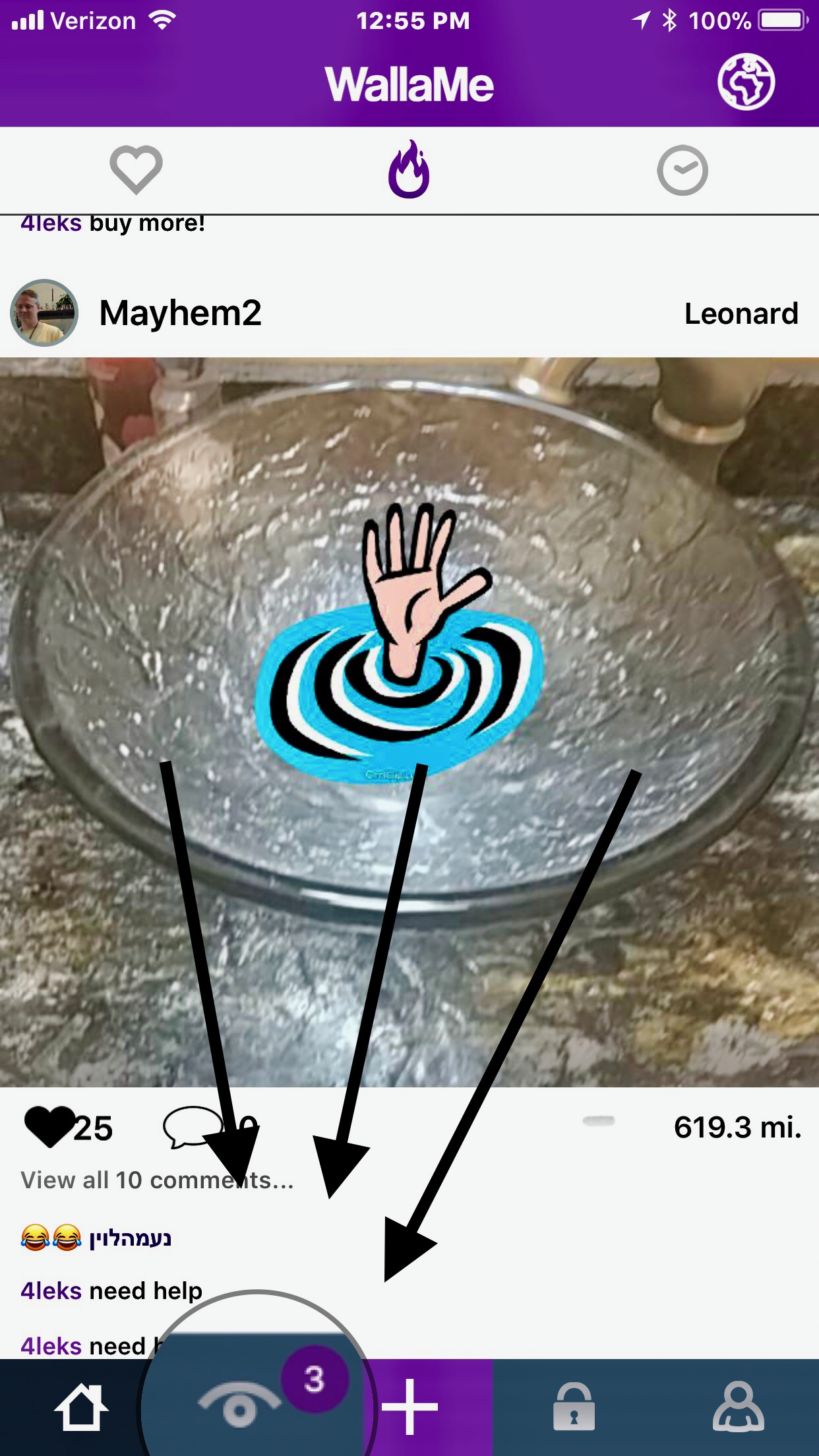 You want to click on that eye with the "3" next to it.

In the above example, there are three (3) AR images in the vicinity. Look for the ones by "District Hall" or "Fab@CIC".

Now try to find those AR images around District Hall and Fab@CIC -- they contain the secret word!

For example, one AR image at District Hall is right under the gumball machine: 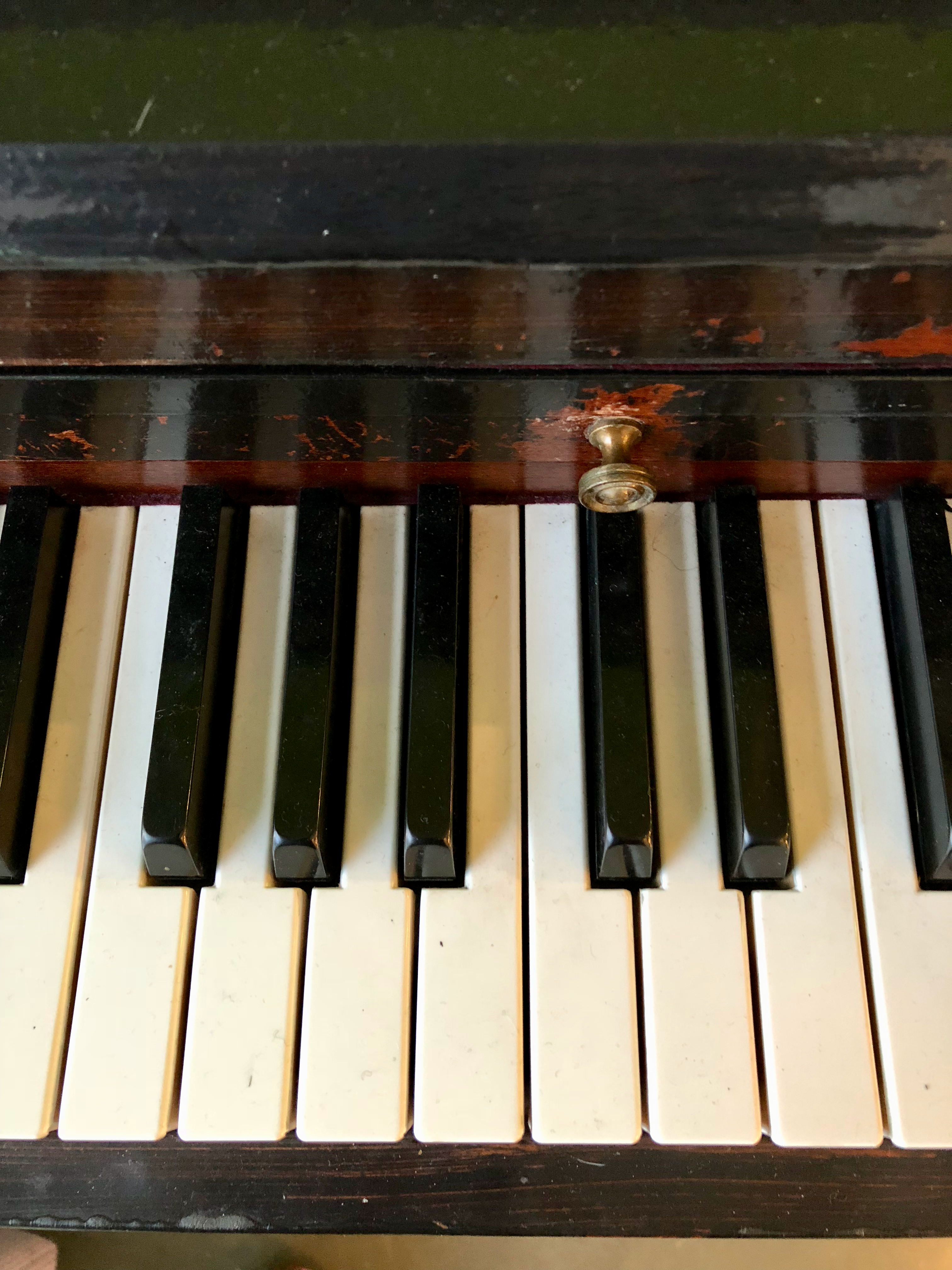 Under the gumball machine

If you point your WallaMe-enabled phone at these images, a secret word will appear.

What do you do next? It depends where you are.