With District Hall closed for the holidays, and a second Covid surge descending like a cloud on indoor places all over, I decided to take my placemaking research outside.

It will be safer there, I reasoned, and I could safely recommend a visit, if I found something worthwhile.

I started with a sculpture garden that had sprouted up alongside a nearby bike trail in Davis Square, Somerville.

I brought along an Osmo Pocket camera, on loan from Max Rottersman. The camera is made by DJI, better known for their drones.

The marketing for the Osmo Pocket is very similar to what was marshaled, originally, for the GoPro: people windsurfing, ski jumping, skateboarding. Lots of skateboarding.

Here's one of many videos put out there by Osmo:

Didn't work for me, lifestyle-wise. Even when holding the camera, I remained a lonely-looking dude trudging through the tromped-on remains of a two-day-old snowfall -- now crusty and getting dirtier by the hour.

Other than that, the Osmo Pocket was an intriguing device, with a 3-gimbel mind of its own, and a surprising number of robo features.

On to the bike trail sculpture garden, if that's what it's called. It may not even have a name.

All I knew about this ragtag sculpture collection I had gleaned from riding past it on my bike. I assumed that it started with a few art pieces, and then slowly grew as locals started populating it with their own creations. No idea how long it's been there.

Here's where it's located: 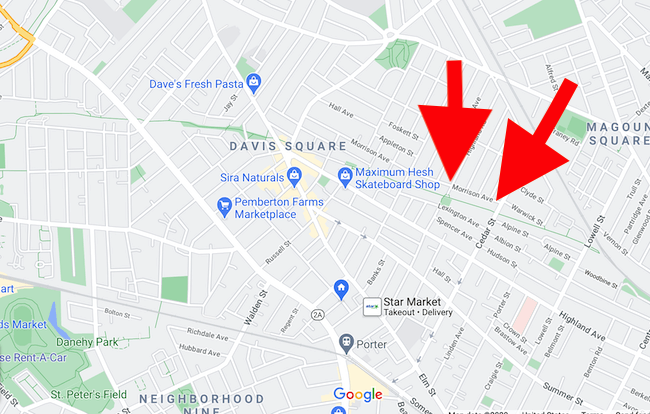 Location of the Sculpture Garden

My visit was not well timed. I got a late start, around mid-afternoon on one of the shortest days of the year, when --- as I mentioned above -- an earlier snowfall was starting to get ugly.

Not ideal, but there was light enough. And mostly I just wanted to see what was there, and if the camera worked at all.

Also I wanted to see if an uncurated art place could ever possibly succeed -- without credentialed judges, professional arts managers, and public or private funds.

Here's my quick sweep of the stretch. I slowed it down a little.

Overall: the space struck me as clever in junky, trash-picky way. I wanted to like it, but it was undeniably dank and shabby.

Towards the end of the video, you'll see what else is visible through the bare trees on both sides of the trail: the uptick in Somerville real-estate development. Many houses are sporting new backstairs and updated porches.

A possible influence on my whole experience of the place: the fading light, the cold, and the snow.

When it warms up, I'll make a return visit.