It doesn't make any sense geologically, but there's a canyon emerging in Cambridge.

A remote urban canyon, surrounded by tall cliffs of glass, metal, and concrete.

A meadow runs through it. And a little stream

It even has a small flock of cranes. 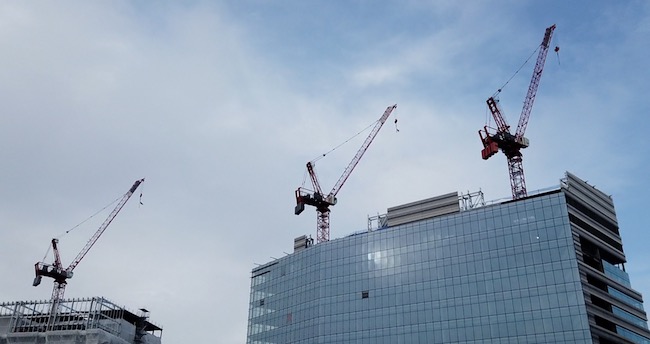 Oh yeah, the name of this urban canyon is Cambridge Crossing. It's way over on the far eastern tip of Cambridge: past Kendall Sq., past Lechmere, past even East Cambridge.

It's as far as you can go, before you bump into the rail yards, and Route 93, and splash into Boston Harbor.

Here's a video: A New Canyon in Cambridge: Cambridge Crossing.

Information from Max (who has published 3 videos on the project)

What I was curious about

How people who work and live in the Cambridge Crossing canyon will connect with Kendall Square, which is the marquee, tech-hub, north star that's influencing expectations for this development.

So I took a walk.

Through "CX Common," down East Street, and under the new Green Line MBTA extension: the most direct route to Kendall Square.

That led me into Lechmere Square, a yawning expanse of intimidating intersections. 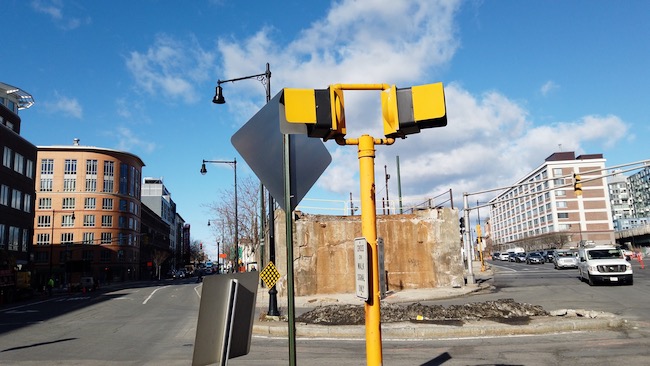 Conclusion: Cambridge Crossing's developers have a lot of work to do to make this a pleasant walk to and from work.

On the way back I looked under the Green Line tracks. I saw a ghostly, windblown shroud next to staircases that may someday be clogged with commuters.

Then I walked back to the quiet canyon.

A few signs of life

1. The promotions team at Cambridge Crossing probably took the summer of 2020 off, but I bet things will ramp up during the summer of 2021, centered around CX Common:  expect live music, food trucks, lawn games, craft drinks...

The goal: get Cambridge Crossing into the mental maps of area residents.

2. Lechmere Square will get a lot of attention, and development -- aimed at making it less of a barren, disorienting expanse of traffic confusion.

Back to my original mission:  my walk from Cambridge Crossing to the outskirts of Kendall Square.

It was surprisingly short, maybe five or six minutes.

So if the Cambridge Crossing developers can make the Lechmere Square gauntlet a little friendlier (which could take years) this remote canyon could be the new eastern tip of the city: East East Cambridge, or maybe East Cambridge East.